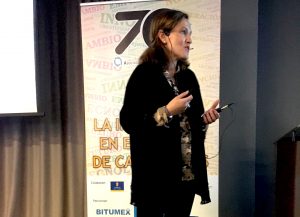 The Conference, under the slogan "Innovation in the road sector", has been held in Las Palmas de Gran Canaria coordinated by the Delegation of the ACS in the archipelago.

De la Peña has detailed during his intervention the state of development in which he is. The deployment of the technology in the vehicle, the tests carried out and the steps for its approval have been some of the key points of its exposure.

With a budget of just over one million euros, CITIES Timanfaya set off in November 2018. It should be remembered that this is the first level 5 autonomous mobility experience in the world.

Elena de la Peña's presentation has been welcomed with great interest by the attendees, not only as an example of innovation but also because of the geographical proximity of a pioneering project worldwide.

In addition, in the XXIV Road Conference of the Canary Islands there has been talk of other developments in R&D on roads, such as those related to self-repairing bituminous mixtures, research in road engineering from the point of view of universities, occupational health , novelties in structure repair or digitization.