First test of the autonomous bus in an urban environment 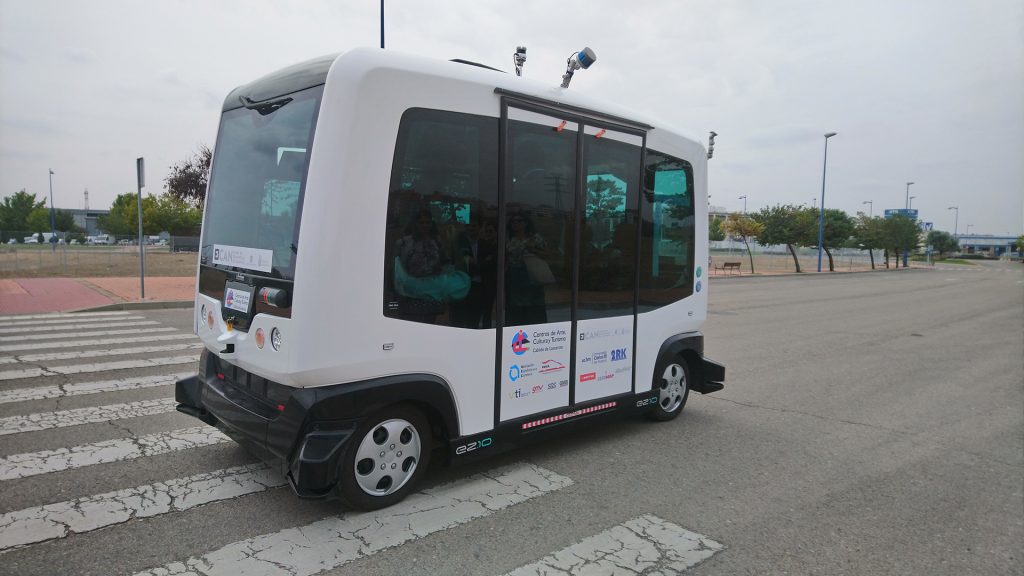 Despite the many technological challenges involved in the circulation of autonomous vehicles in an environment such as the Timanfaya National Park, on the Canary Island of Lanzarote, the CITIES Timanfaya project is progressing well.

Proof of this is the demonstration that took place on September 20 in Leganés (Madrid), and which is the first test in urban areas of the prototype of minibus that in 2020 can already be seen circulating on the island.

The vehicle, with institutional representatives and media on board, has made a circular route of about 400 meters, at an average speed of 8 kilometers per hour, in a completely autonomous mode.

This demonstration is part of the actions developed by the Carlos III University of Madrid (UC3M) to celebrate the European Mobility Week.

Among them, the Mobility day in smart cities, which has served to present the progress of the CITIES Timanfaya project, promoted by the Centers of Art, Culture and Tourism of the Cabildo de Lanzarote (CACT) with funding from the Canary Islands Development Fund (FDCAN) . The initiative is led by the Spanish Road Association (AEC), with the technological support of UC3M, and the consultant 2RK, and has the collaboration of Mapfre España, GMV, Vázquez and Torres Ingeniería, SGS - GMR, Albufera Energy Storage and Cesvimap.

During the day, those responsible for the prototype have explained the technical and technological challenges of the project and how they are solving them.

Regarding the difficulties of the project, Javier García-Guzmán, Professor of the UC3M and one of the program's researchers, said that one of the problems that arises is the loss in the vehicle of the GPS signal in several sections of the route. The complicated orography, with slopes, sharp curves and embankments, is another challenge for the autonomous function. And also the impossibility of installing aids or altering any natural element that is on the road, since it is a National Park and, therefore, a space with the highest level of environmental protection.

To counteract these inconveniences, the team works with a whole battery of intelligent systems on board the vehicle. In addition to a differential GPS technology to ensure the geolocation of the vehicle with an accuracy of one to two centimeters, it has LIDAR systems that detect obstacles, technology for the location of the bus at all times, as well as 3D cameras and other specific driving programs and for the remote control.

José Luis San Román, Professor at UC3M and another of those responsible for the project, said that one of the main challenges they face is not technological, but legal and approval. "The legislation does not contemplate the circulation of these vehicles," he says, and besides, there are no insurance tailored to this mode of driving.

For her part, Julia Fernández, Project Coordinator from the CACT of Lanzarote, has expressed her satisfaction with its implementation, ensuring: "We will value autonomous and electric mobility worldwide."

The Councilor for Mobility and Business Development of Leganés, Francisco José Muñoz, has also closely followed the test, pointing out that this initiative will play a very important role in the democratization of sustainability and to reduce costs and mobility problems.

It should be remembered that the CITIES Timanfaya project has a hundred percent Spanish seal, and will undoubtedly contribute to positioning national technology at the forefront of international R&D.

The conference on Mobility in smart cities also hosted two round tables: one dedicated to Responsible Research of UC3M in mobility, and another on Responsible Innovation in Smart Cities. In the latter, the Technical Director of the Spanish Road Association, Enrique Miralles, intervened.