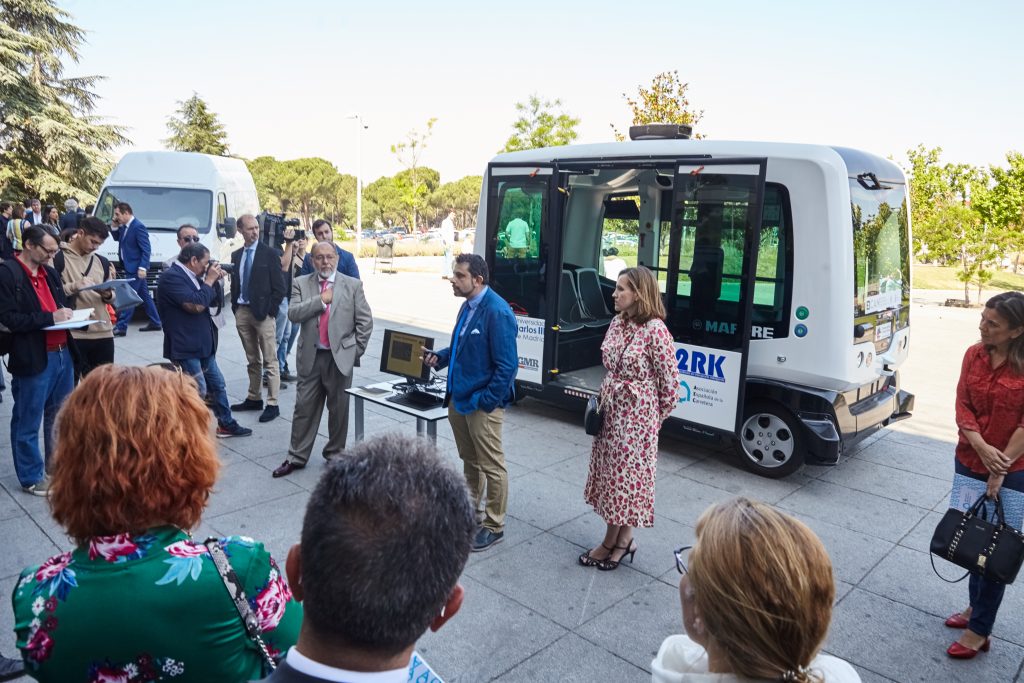 On Thursday 13th June, the managers of the project CITIES Timanfaya (Spanish acronym of Intelligent Concept for an Integrated, Ecologic and Safe Transport) joined media and road sector in the Civil Engineering School of Madrid Polytechnic University, for the presentation of the technology demonstrator of the project. In less than one year, this vehicle will circulate along the Route of the Volcanoes without driver. It will be the first level 5 autonomous vehicle in the world. It will be in Lanzarote, leaded Centers of Art, Culture and Tourism (CACT) of the Cabildo (Government) of Lanzarote.

The project, developed in Spain with Spanish technology, is managed by the Spanish Road Association, with the participation of 20 PHD and 40 graduates in different disciplines. The University Carlos III of Madrid and the company 2RK Intelligent Transportation Consultancy act as technical leaders of the project. Other companies, such as Mapfre, GMV, VTI, SGS-GMR and Albufera Energy Storage are also involved.

Driving along the complicated route of Timanfaya is the main technological challenge of the project With a budget of more than one million euro from the Canary Islands Development Fund (FDCAN), it was presented by Javier García Guzmán, professor at Carlos III University, Ricardo Chicharro Sánchez, associated manager to 3RK and Elena de la Peña, Deputy Director for Technical Affairs of the Spanish Road Association.

“The vehicle does not have a position for a driver; thus, all decisions are taken by the vehicle itself, by means of Artificial Intelligence”, pointed Mr. García Guzman.

In addition, the vehicle features up to four safety systems and “it is only necessary for one of them fail for the vehicle stop automatically” said Ricardo Chicharro, who explained that, in the first phase, there will be an in-situ supervisor to respond to any enquiry that may arise. The supervisor's performance will also be reinforced from a control center "which will continuously monitoring for a distance the behavior of the bus".

The CITIES Timanfaya Project, a “Spain Brand” initiative, is based on a revolutionary and intelligent concept for the use of ecological, autonomous and secure transport in a unique framework such as the Timanfaya National Park. Thus, CITIES will not only position the island of Lanzarote as a worldwide reference in high-quality tourism, but it will position spanish technology at the forefront of international I+D+i.

Whatever, in the tourism sector, Lanzarote sought to make use of the possibilities offered a sustainable mobility model that reduces the impact on the environment and lets enjoy responsibly of the great natural treasures of the island, while minimizing the negative consequences associated with the transport. It is therefore hardly surprising that the Centres for Art, Culture and Tourism of the local government (Cabildo) lead the first autonomous and sustainable mobility project in a world-wide referral tourist environment such as the Timanfaya National Park. In November of last year, the contract between CACT and the Spanish Road Association (AEC), coordinating entity, was formalized in order to launch CITIES TIMANFAYA, a groundbreaking initiative that, as of a technological demonstrator that will be operational in the spring of 2020, presents a tour along Volcanoes Rout carried out by in state-of-the-art, electric, autonomous and multimedia vehicles.

See images of the presentation: https://tv.aecarretera.com/el-proyecto-cities-timanfaya-se-presenta-en-sociedad-en-madrid/